As promised, here is a summary model of how Samsung creates value. It’s meant to be a companion piece to the post I wrote last week on Apple. Next week I’ll compare the two.

Of course, between the time I said I was going to research this post and now, Samsung’s Note 7 crisis escalated and the company ended up halting production of the product.

Here’s a summary by Hiawatha Bray and the NYT of how things look right now on that front. Although it’s not the purpose of this post, this analysis might shed light on Samsung’s strength and capacity to survive this crisis.

This post was created using the Value Creation Worksheet that’s available for download on our site. To fill it in, I reviewed public reports issued by the company including their  2015 Business Report and the Samsung Sustainability website pages and downloadable report. I used their words and approaches as much as possible. This means that the lists might not always be complete. But my hope is that it will stimulate others to think about the approach. 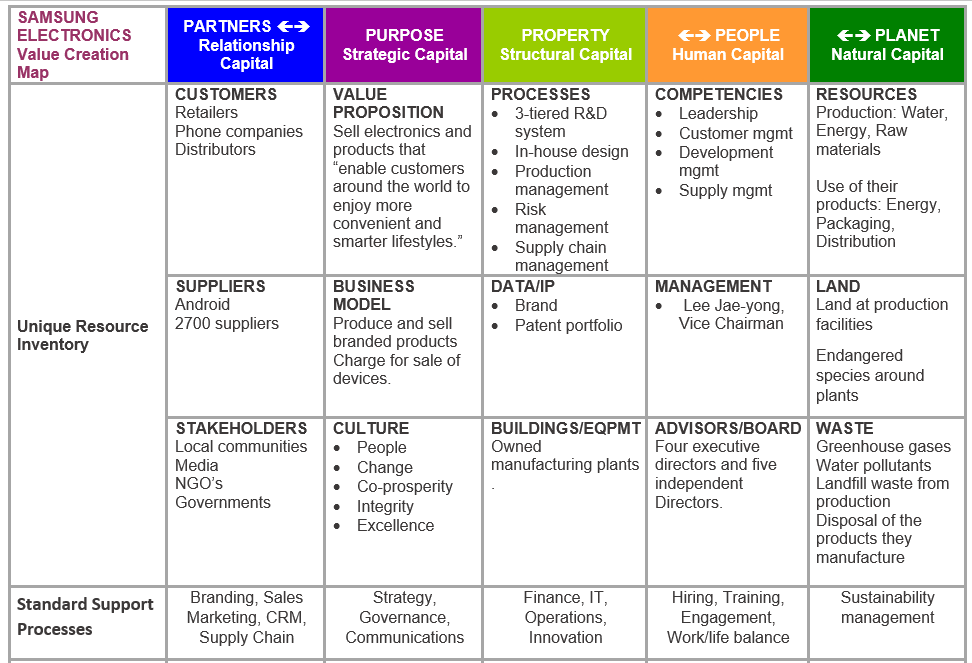 Samsung is an enormous and highly complex company with three major divisions and what looks like hundreds of different legal entities. There are three major divisions: Consumer Electronics, IT &amp; Mobile Communications, and Device Solutions with a total of 325,677 employees.

The company does not talk in its reporting about the kinds of customers it serves or its business model, except to name the top five customers (Apple, Deutsche Telekom, Softbank, Verizon and Best Buy). While it doesn’t list its factories, it mentions training at 31 production sites around the world.

It does list key suppliers of many kinds in its sustainability report but it does not mention its relationship with the Android operating system community.  Google (which developed Android) is mentioned once for an unidentified patent cross licensing agreement. This omission was striking to me because I chose Samsung for this post because it’s a great contrast with Apple which uses its own operating system.

As in the Apple post, I had to use a proxy for culture. The list here comes from the statement by management of their core values. A true analysis of culture might include characteristics such as “move fast” as highlighted in this article from Bloomberg on How Samsung Became the World’s Number 1 Smartphone Maker.

The stakeholders listed in the worksheet are names and discussed specifically including those listed above and Suppliers, Customers, Employees, Shareholders.

With regard to the company’s processes and IP, this article from last year in HBR How Samsung Became a Design Powerhouse talks about a strategic decision in the 1990’s to bring design in house. A detailed discussion of innovation and R&amp;D is included in the sustainability report (interestingly, not the business report) .

As explained in the New York Times, the company’s management has shifted to Lee Jae-yong, who

took the helm of the country’s largest family-controlled conglomerate, or chaebol, after his father, Lee Kun-hee, the chairman, became ill in 2014. The senior Mr. Lee, who has not been seen in public since, famously burned a pile of 150,000 defective Samsung phones 21 years ago to demonstrate the company’s commitment to quality

No list of key raw materials or hazardous substances. However, there is a list in the sustainability report of hazardous materials that have been eliminated from its products.

How does this compare with Apple? Check out the analysis of Apple and the comparison of the two companies.

Ready to try these ideas out for your own company?