In follow up to my post on developing value creation models, I thought I would try to create some examples using familiar companies.  This first example is for Apple.

Here’s the approach I’m taking. I’m using the Value Creation Worksheet that’s available for download on our site. To fill it in, I reviewed public reports issued by the company (see notes below) and filled it in using their words and approaches as much as possible. This means that the lists might not always be complete. But I hope it’s good enough to be instructive. Here’s the worksheet (click to see a larger version): 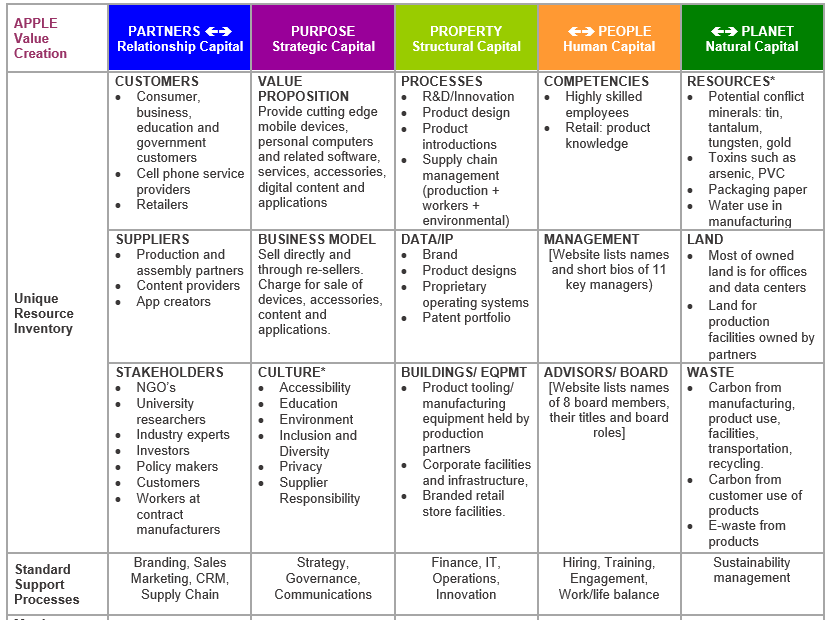 The basic idea of value creation is that a business exists to solve problems for its customers. It creates an infrastructure of different kinds of resources to make this happen. The worksheet includes all the major categories of resources including tangible and intangible property, people, partners and natural capital.

If you’re familiar with the IIRC model, you’ll notice that this approach uses strategic capital instead of financial capital. Strategic capital addresses monetization through business model but also brings in the element of purpose and culture which are the glue that holds the value creation system together.  It’s impossible in my experience to talk about value creation without this column.

The natural resources section here  includes the problematic components of the company’s products but doesn’t really include the major components of its products because this wasn’t available in the reports. But there’s enough here for you to get the idea.

I put an asterix next to culture because I’m not sure that this is a great description of the company’s culture.  Since Apple doesn’t talk externally about its culture, the items listed here are the company’s values as they appear in the overall site map at the bottom of its web site. Third party articles about the company’s culture highlight the company’s emphasis on design (Macworld.co.uk) and brand, secrecy, high performance and collaboration (Business Insider).

Another weak section is the employee competencies.  It’s interesting that literally the only things that Apple says about its employees in all its reports are there are 110,000 of them and that they are “highly skilled.”

Some of my colleagues question whether culture and competencies belong on this worksheet.  If you are using it to plan a public disclosure, you might decide to not disclose this but the reason that I use it is that a company’s ability to create value is intimately linked with the capacity and engagement of its people. In the logic that the true intent of integrated reporting is to support integrated thinking, I suggest that you leave it in for your preliminary analysis.

Why bother creating this worksheet? Because every company uses all the capitals to some extent. This approach forces you to map all the capitals and to see them collectively as a system. Once you have this done, then you should move on to measure the system. That’s a topic for another day. But before I move to that topic, I want to do another post for Samsung, one of Apple’s competitors which sells similar products but uses a creation system with some marked differences from Apple’s.  So stay tuned and share your thoughts. Also feel free to take a stab at creating your own model and download the worksheet.

Notes: Apple does not publish an integrated report so this post was created primarily using recent public reports published by Apple: 10-K, Supplier Responsibility Progress Report and Environmental Responsibility Report. and Corporate Governance section on the company’s website.  The graphic is a screenshot from the Apple 2015 10-K.